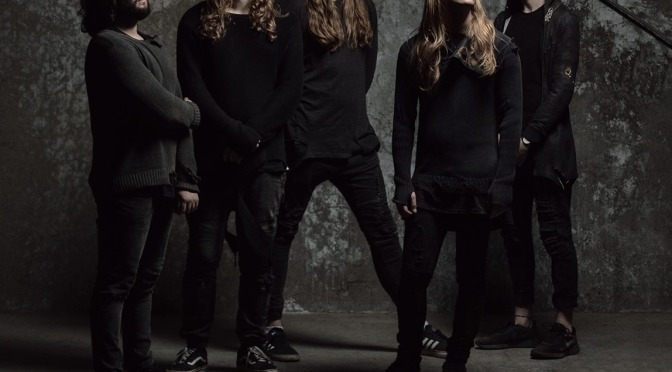 There’s no denying that the symphonic eruption at the start of this incredible album conjures up memories of Devin Townsend’s many releases in sheer magnitude and power. It hits like a smack in the face..instant and disorienting. I liked it. A lot. If nothing else it set the tone for what is to follow which really challenged my preconceived idea’s about the band. I’ve seen huge lines outside venues for this band and those queues consisted largely of a certain demographic. I’ve seen promo, posters, photo’s and I judged the book by it’s cover.

The first proper song on the album ‘Hanmer Street’ brings big time melodic shred, delicate staccato picking and a highly percussive rhythm section into focus. Charlie’s vocal range and tone sound utterly superb over the top. The technicality of the music is really impressive but never overshadows the vocals. It’s an energetic tune that really sells this band as a world class contender.

I have to pause to reflect that the high quality of the production is evident right from the beginning and if you aren’t impressed by at least this much…check your ears. This is NOT a phone-speaker-spotify stream album. Do it justice and chuck some cans on.

‘Persist’ follows with a heavier lean adding decent chugs and growls to the bands palette. The choir-like vocals that join, the guitar solo, blistering drums all combine to create a stunning assault on the senses and by this point im hooked.

‘Patting The Black Dog’ has a dramatic Periphery-level appeal to it. Where it differs from the aforementioned djuggernauts ..is how Ebonivory stay on point and maintain the melodic journey instead of diving down a rabbit hole of acid inspired weirdness. I like knowing roughly where things are going instead of bracing for the next curve ball.

‘Cats’ is the first break away from the assault and branches into a more subdued and emotive band. The beautiful blend of clean guitars (and glacial amounts of reverb) and the piano is a post-rock lovers dream. ‘In Reverie’ follows a similar method of employing stupid amounts of ambient spacey tricks to build up into an eruption of prog/rock bliss.

I liked that they went and played with the dynamics, the ebb and flow of the material on this album to give the listeners ears a break and just as tastefully brought it back around with some absolutely massive riifs.

‘Explosions After Dark’ was a first direct taste of the album, released not 2 months back and hearing it the context of a full album really helps to make sense of it. The vocoded vocals do work in the way they’ve done it but I hate them! Ha ha! Credit to the band for being brave and stepping out of the normal. There’s a certain theatrical quality to this song that I can appreciate but as a pre-cursor to set up hype for the full length..im baffled as to this choice. It’s weird. Good weird.

‘Bluegums’ tries different things as well with the layering, vocal effects and the overall composition..but in my opinion these risks really landed and added to the spectrum of sonic places I want to return to after the track finishes. The dreamy keys, tuned vocals and even hand drum percussion just floored me. Once again I’ll re-assert that this band is going to blow minds.

Summing it up: this brilliant, unexpected, colourful and ambitious album is worth every minute, every cent you give it. Do it. This is a band who we’ll taking about for a while to come if they survive the current storm surrounding the industry. To see this carried out on stage will be a spectacle to behold.

AOTY contenders…this needs many many repeat listens to digest!