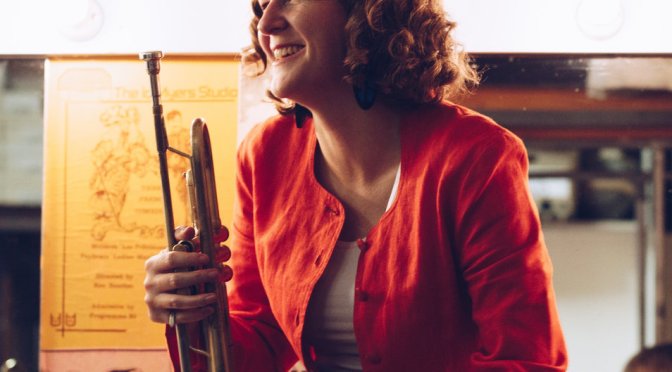 So after having my brain scrambled by the release of [A]part by Ellen Kirkwood and the Sirens Big Band, I had to get in touch and learn more all about it. Here’s how that played out.

MIA: So Ellen..what role do you play in all of this..and who are The Sirens Big Band?

Yes, that’s me! I wrote all of the music in [A]part, and I have been a member of Sirens Big Band since it started up in January 2010. Sirens Big Band began as a reaction to the male-dominated jazz scene. In the beginning the membership was entirely female. Like a typical big band of the type that’s been in existence since the swing era in the 40s, the group is (most of the time) made up of 4 trumpets, 4 trombones, 5 saxes, bass, guitar, piano and drums. Most of the time when you see a band like this (and there are lots around) you will notice that the players are mostly, if not all, men. Sirens was created not only to buck this trend, but also to create a community where women jazz musicians weren’t the odd ones out, and all met new challenges together. Having our own sound was very important to us as well – we didn’t just want to be “another big band only female” so we developed our own unique brand of largely world music crossover jazz. Throughout the years I have written may original pieces and arrangements for the group, which Sirens plays regularly. Nowadays we still have a membership of mostly women, but we also have a trans member and often a few guys will play with us too.

MIA: Is this a regular line-up for you..or did you recruit them for the project?

Lately the lineup of the band depends on what project the band is working on. Over the past year there have actually been 2 different projects in the works – a lot of members are the same for both, but there are a fair few differences, depending on availability, what instrumentation the music is written for, and who’s right for the job. For [A]part, Sirens is actually reduced from its usual size, and instead of 8 brass (4 trumpets and 4 trombones) there are 5, including french horn and tuba, which are not typical big band or jazz instruments! Also, one of the 3 featured soloists is a vocalist, which we haven’t had much in the past either. So a bunch of people were specifically recruited for [A]part.

MIA: Also..there’s guests! How did you go about getting others to join in? For the unfamiliar, who are all these people and what are they doing on the album?

The three guests are Andrea Keller on piano, Sandy Evans on saxophones and Gian Slater on vocals. They are some of my favourite musicians in Australia and I’m so stoked that they’re part of [A]part (pun intended). I’ve known Sandy Evans for a long time. She has been a mentor to me, and in recent years we have played together in other projects of mine and hers. I owe a lot to her for encouraging me and giving me opportunities so it’s wonderful that her amazing playing and vibrant character is on this album. Andrea’s music has always inspired me – she is one of my favourite composers and pianists, and one of the most in-demand musicians in the country. We had met a few times so I wasn’t a stranger to her when I asked her to play in my piece, but nevertheless I feel very lucky to have had her play my music and contribute her incredible creativity to it. Gian Slater’s voice is like no-one else’s, and I love her unique approach to improvising, composing and using her voice like an instrument. I didn’t want a typical jazz singer, and I didn’t write lyrics; Gian’s voice was exactly what the piece needed.

MIA: As the central figure, do you write and compose all of this, or are you just building the foundations and letting everyone go wild?

There are several spots where there are improvised solos, but it’s mostly composed. Certainly there are places where players can use their own interpretation, yes, but that applies more to the rhythm section (drums, bass, guitar, piano) than the saxes and brass.

MIA: I’ve really enjoyed some crazy alt jazz this year from bands like COAST and Kurushimi, all messing with the formula and adding in other influences. [A]part definitely feels like it belongs outside the box as well. Do you set out to push the envelope or is this just a happy accident?

Ah yes, the envelope-pushing is definitely intentional. I like listening to lots of different kinds of music, and though I studied Jazz at university I love experimenting with other styles in combination with it, or even messing around with non-jazz, although elements of jazz usually creep in without me really meaning them to…. Also I like to write subversive music and try to challenge people’s expectations.

MIA: I really wanna ask..with the 4 tracks, they get pretty deep..with many twists and turns within, at some points even reaching a full stop or a total mood shift. Why the decision to let the track keep going, rather than clicking over to a new track number?

Good question! I did consider this when mixing the album, but I just didn’t want to chop up the sections. Despite the fact that there are sub-sections within each track, I felt that outside of their context these sections would sound a bit weird, particularly if someone stumbled across one in a shuffled playlist or something. The whole album is basically 1 long piece anyway, and the way it’s constructed is very purposeful because of how the different sections relate to each other, including the order in which they occur, so I wanted that to stay as intact as possible, if that makes sense.

MIA: Lastly.. the sound..the mix..the production is just magic! How much work was it to produce an album like this?

In a nutshell, roughly 3 and a half days of recording, 3 days of editing, 3 days of mixing and 6 or 7 hours of mastering. More specifically, it was recorded for the most part with the entire band in the one room with very minimal separation. There were mics set up around the room in addition to one or more mics on each instrument. This meant it was very performance-like; nobody was wearing headphones and there was no click track. Some of the recording was done in Melbourne, due to Gian Slater, the vocalist, not being able to come up to Sydney on the recording days, and there were a few overdubs at a different studio in Sydney. The day after the recording I listened through most of the takes, finding the best and making notes for editing to make the studio time more efficient. Basically, I had a really incredible sound engineer: Bob Scott. He’s just great at every part of the process; recording, mixing, producing, mastering. I was there for all of the editing and mixing so decision making on that front was a joint effort, but the actual sound and mix was all him.

And so I think I have a new Aus-music hero to look up to. I don’t even play jazz really  but the ability to organise something as complex and cohesive such as this is truly inspiring. I strongly recommend getting your ears around [A]part to hear what all this fuss was over!!