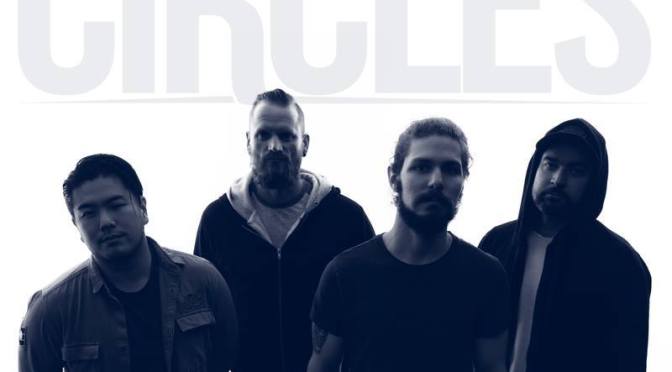 I’m a music fan and getting to do a Q&A with a band you really like is a buzz. Melbourne’s prog-darlings ‘Circles’ are one of those acts whose career I have watched and followed since they came along. So when given an opportunity to get a few words in with Circles drummer Dave Hunter ahead of the release of ‘The Last One’ I had to take it!

SO what took you so long? Where’ve you been?

I must admit that I am really glad this band is back and sounding all the better for it. Unlike some other bands *cough* who decide *cough* to come back from the grave and sound like shadow versions of themselves.

Yeah it’s definitely been some time between releases. We were very conscious of this. We’ve been quite active on the touring front in Aus, heading out with Fear Factory, Periphery and Ne Obliviscaris to name a few, but things in the studio moved a bit slower. We never saw this gap as a hiatus or break situation hence why we were pushing forward with the tours. There’s been a lot going on behind the scenes during the completion of ‘The Last One’. Members building houses, members having kids, members leaving…Life happened! Although it wasn’t all that I suppose. This album was actually completed just under 12 months ago believe it or not, but we wanted to release it properly and not just throw it out there to die. We’re stoked to have waited, as we have a really solid team (Wild Thing Records, Season of Mist) behind us now.

There’s some really different material on this album, when compared to the more persistent onslaught of bouncy djent riffs of past releases. Songs like ‘The Messenger’ and ‘Arrival’ felt more akin to a Dead Letter Circus-vibe than a Periphery one. Was this progression something that came from the line-up changes or somewhere else?

A little bit of both I think. Our previous release ‘Infinitas’ definitely came from a place of ‘pleasing the people’ if I can say that. We tried to write the album that we assumed people wanted to hear. Although it has a place in all our hearts, it did feel forced at times. When sitting down to begin writing for ‘The Last One’, it was very different. We made a conscious effort to write music for ourselves, the music we wanted to hear. Every aspect of this album, lyrically and musically was written with a strong emphasis on feel (and how we were feeling). It’s the most honest we’ve ever been with our music and it’s the best it’s ever felt. We set out to capture the raw, live emotion that we feel a lot of modern heavy music lacks these days. Hopefully people can go into this with an open mind. I’m sure there’ll be the odd djent purist that has their issues with it…but at the end of the day we don’t really care either way. Haha!

‘Renegade’ and ‘Dream Sequence’ have some of the heaviest moments on the album but the changes and shifts that always follow just sound incredible. Is the material on ‘The Last One’ going to be a challenge to deliver live? How are you going to pull all this off?!!!!

From a live sense, our music has never felt so comfortable to perform. I guess this comes from focussing so much on this aspect when writing the songs. As these songs came together and were chopped and changed, they were always looked at through a ‘live’ lens. It was very important to us that the mission statement for this album would translate to the stage, just as strongly as it would hearing it at home for the first time. The set that we’re rehearsing at the moment truly does feel like it was meant to be. Even the way the new material sits with some of the older songs in the set. It’s created a whole new dynamic for our live show.

Circles are supporting TesseracT on their upcoming visit which you must be psyched about! Exactly which spell did the band use to conjure this? Was it from the Standard Book of Spells or did you find it in the ‘restricted section’? Cos clearly this is a magical pairing.

We are very excited for this tour. We’re all fans of Tesseract, especially the latest album ‘Sonder’, so it will be a bonus we get to see that every night on top of sharing the stage. We were just lucky enough to get the call up I guess. It coincides with the release of ‘The Last One’ perfectly too so maybe there was some magical higher power looking out for us. Haha!

Speaking of tours…you’re going to Europe with the ever amazing Caligulas Horse and IBUILTTHESKY…just wow! How does something like that even happen? Any chance you’ll do a victory lap of Australia with them? 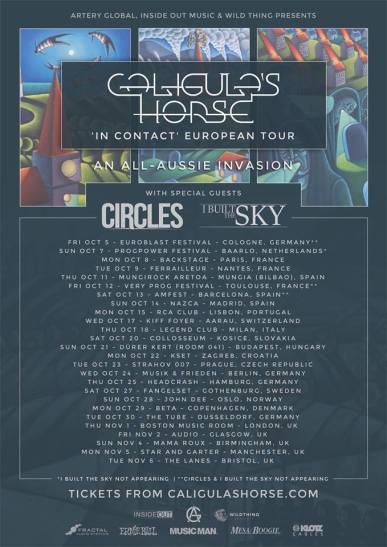 We’ve obviously known those guys for quite some time and we share some common label/management connections. It’s always been on the bucket list to take an all Aussie line-up overseas and the opportunity finally came up. It really was as simple as a few emails to get everyone excited and on board. Tour logistics is a whole other story though, haha, but everyone was definitely keen and on board to make it happen. EU/UK are very receptive of what’s going on down under here in the prog scene and if our previous experiences touring there are anything to go by, this is going to kick ass! Hopefully we can make something similar happen here in Aus one day.

Tell us about the concept behind the artwork and photography on the album. How does it tie into the music or lyrics?

Lyrically, the album can be quite dark at times but with a positive twist (if that makes sense). We explore many different themes of how we can become overwhelmed and sometimes frozen with life’s challenges that get thrown our way. Whether that be our own mental struggles or the state of our world in general, sometimes we can be consumed by it all and things come to a standstill. This is where the theme of water came from, being completely consumed by something with no control. On the back of that, the lyrics also explore the fact that it’s never the end for anyone. We all have something inside that allows us to rise above what’s standing in our way. We are ultimately all in control of our own destiny. The cover art shows a child holding a paper boat, walking out into a tidal wave, with every intention of sailing that boat and overcoming the world that is crashing down around him or her. This child is the last one…everyone is the last one. The power exists inside each and every individual to make the shift into a better place if we want it bad enough.

I found your ‘Infinitas’ and ‘Compass’ releases really tricky to find in stores here…don’t know if you knew. (*jokes) I had to order them from online retailers in the UK to get physical copies!!! Is ‘The Last One’ going to be widely available on shelves and where else can we find it?

We will definitely have much more coverage from a retail perspective with this release. All of our previous records were released through a UK label (worldwide) so sometimes the reach was limited with what we could do. Now, having Wild Thing Records in AUS and Season of Mist in UK/USA, we have much better coverage in various territories so it shouldn’t be hard to find. Both labels have some pretty sweet pre-order packages going to so you should check that out!

Thanks for taking the time to do this, and good luck on the tours! I can’t wait for the whole thing to drop and watch people froth over this album like I have been!! Ha ha!

One thought on “Q&A w/ Dave Hunter from Circles”