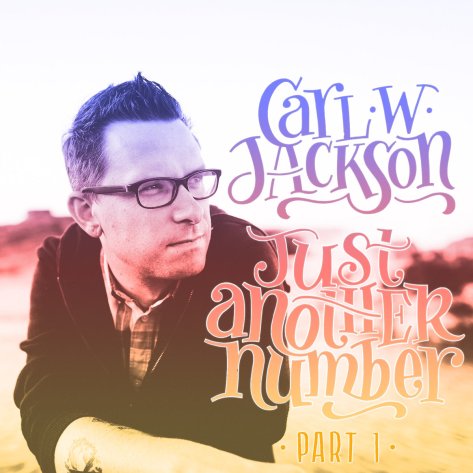 Pop-driven rock tunes that get you singing along without that awful taste of over-produced commercial saturation are hard to find. Luckily Carl can literally just sweat them out with a bit of elbow grease and a microphone.

It’s a quality that songwriters envy above all else, that irritating ability to throw a few chords together and pair a phrase with melody to get stuck in your head. I’ve seen this guy do it for laughs..on the spot..much to the acclaim and closet disgust of friends and peers. He’s gifted. Nuff said.

This was never seen by more people than during his tenure as lead vox/guitar in pop-punk band ‘Wishful Thinking’. However THIS new release ‘Just Another Number pt.1’ is a solo EP. Not his first either, but after what has been a few years break in terms of releases, this definitely feels like a return to form for the guy.

It’s easily summed up with 5 songs about life, relationships, some well written lines and enjoyable hooks backed with poppy/rock music and quite honestly..it’s a lot of fun! There’s some well executed harmonies, great pacing and the performances are solid and tight. Evidence again of an artist who’s honed his craft.

Personal favourite ‘Ask Again’ is a tongue in cheek song about drawing lines and bringing the foot down. I can’t help but ponder if this is a song from a father to his son..’I brought you into this world and I’ll take you out!’ ha ha so rough! But it’s catchy..and makes me smile.. so yeh..maybe it’s ok to be a fun song about being harsh? Works for me!

Nikola – has an easily identifiable MXPX/Ramones classic punk clash to it. Lyric vid will ensure the ear worm will get well and truly embedded in there. Proceed with caution! If we’re going to be honest though..id rather this swimming around my head ANY DAY than the usual pop-drivel on the radio.

EP closer ‘What Happiness Is’ has a beautiful honesty and reflective sentiment to it. A more emotional and serious track that gets away from the punk/rock-ish material before it. A classy way to round this collection of song up.

Guitars sound great with lots of drive and bite where they need it, solid tight performances all round, bass is clean and sits right in the pocket. All up a great mix that leaves Carl’s vocals to the front since that ‘s where the money’s at!

Follow the links below to give it a listen and grab a digital copy via Bandcamp..or find it on Spotify.