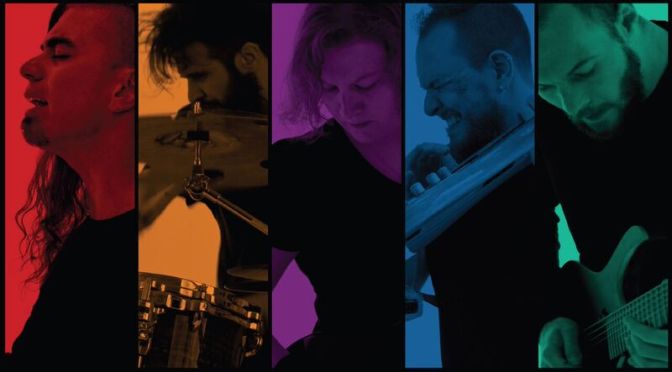 Combining flamboyant musicianship and accessible song writing is a delicate balance which many aspire towards but few achieve. Voyager have the finesse and maturity to manage this tightrope act between awe inspiring and attention grabbing music. ‘Ghost Mile’ is an album that provides a shining example of just how heavy and how technical you can get in this genre without sacrificing a good song.

It’s a kind of conceptual marriage between riffs that bend your brain, grooves that hurt your neck and lines that can have you singing along simultaneously. This is something that has worked extremely well for artists like Karnivool, Twelve Foot Ninja, Circles, Caligulas Horse and many others. Voyager have it too.

For the uninitiated, Voyager are from Perth (poor bastards) and pay a progressive/metal/rock style of music that features terrific melodic vocal performances which could have just as easily suited the new-wave pop era of 1980’s. Think of how well a band like ‘The Presets’ have achieved this with their brand of 80’s meets today mash of music. This is like that..except it goes hard.

The opening song (and lead single) ‘Ascension’ starts proceedings off with a middle-eastern feeling that somehow reminds me of the opening theme music of the sci-fi show Stargate (yeh im a nerd) until the deep churning riff and djenty chops kick in. It’s killer. The crystal clear vocal production makes it easy to appreciate vocalist Danny Estrin’s incredible range and control of his tone as he sings “It’s far to go // we’ve said it for too long // so far to fall // we’re going it alone”. It’s huge.

On track #3 ‘Lifeline’ the band sound as committed to the riff wizardry as ever. The clean picked guitar with dotted-8 delay’s pings and rings out while the massive dream-theatre-esque snare rolls and syncopated stop start technicality shine through. The smiles on my face at this point couldnt get any bigger reminding me of the first time I heard DT’s ‘Images and Words’. Bloody brilliant. The solo midway feels offbeat and yet utterly stunning, juxtaposing the idea’s of melody and dischord in a passage of musical bullshit I cant adequetly explain. Just go listen to it.

Title track ‘Ghost Mile’ is just as stunning as the 5 tracks that come before it. The freedom afforded to the bass to roll and stutter over the drums is a great touch through the verses and the vocals steal the show. Again. Enjoy all the stocatto drops and chops, listen for the glitch synth parts that drift in and out. The chorus finds an uplifting feeling until the fucking blast beat explodes in the middle and reaches something more akin to black metal except..somehow..it feels exactly right. This band is fucked.

I could genuinely go on for ages about all the standout moments, struggling to use words that wouldn’t honestly do it justice…so I’’ll sum it up with: this is another standout Australian release which the world will adore us for. Thankyou Voyager.

They’ve long held the respect and approval of peers and critics with Australia’s heavy music landscape and certainly the world beyond that. The release of ‘Ghost Mile’ will only solidify that further and doubtless rank in many AOTY lists come December. It’s made mine.