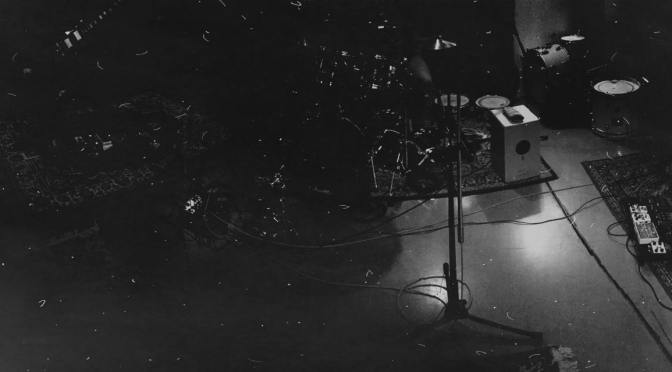 Whatever preconceptions you may hold regarding music branded as psychedelic-doom could well be challenged by what’s held within Adrift For Days album ‘A Sleepless Grey’. The meandering and wallowing tracks are the stuff of bad dreams and lonely nights. It’s reminiscent of early My Dying Bride, Type O Negative (without the overstated palm muted chugs) and takes some big cues from My Bloody Valentine not to mention a number of other gems from the days before we classified everything into sub genres. If you’re a fan at all of anything slow moving, heavy and noisy of the past 20+ years then this is going to rock you. Best bit is…they’re from Australia.

The music borrows liberally from a variety of sources (as I’ve said) BUT never commits to one camp. Whilst the tonal themes are born of minor chords and chilling ambience, slow movements, heavy hits and lots of space; the guitars resemble guitars rather than synths, the drums have a resigned presence that never over bears or dominates the mix whilst the bass drags the low end along in an ever consistent fashion.

Mick’s vocals shift from subtle and sombre passages to outright screams and howls that suit the build and crescendo’s fittingly. It’s not quite a monotone performance but rarely reaches for more than a few notes and the dynamics and pacing of his singing are a fresh change from the expected deep growls and wails of other bands in this genre. You won’t be singing along, that’s for sure.

It’s a myriad of things to speak of but to save time I’ll focus on one of the highlight tracks titled ‘Feast Of Fools’. The opening guitar strums a chord repeatedly and feedback tracks behind it. The drums explode with the bass trudging behind some 30 seconds later. Mick screams and the darkness begins to flow. It’s heavy. At the 4 minute mark, one chapter comes to and end and the noise dies down to let a swell of noise come to rest. The next section commences. More of the dark ambience ensues, swirling guitars and building drones of reverb and feedback gradually reconnect with the soundscape. The band build back up to a monstrous cacophony of post-metal heaviness and oscillation. It’s hard to tell where it all comes from, knowing that it’s only 3 guys. As the drums literally crash to a haunting close, the droning fuzz and deeper-than-hell guitar/bass fall apart like a tape player unspooling all over the floor…the deathly growls and guttural vocals persist behind it. The 8 minute journey into the bowels of hate reaches its end and I am left with the sense that given the chance, they’d go for another 8 minutes at that pace. This is devastating music.

Not all of what is contained on the album measures up to such desolation. Some of it is actually less intense and more melodic, leaning and swaying towards more post rock a’la Isis and even early We Lost The Sea. A big ‘well done’ must go to Art As Catharsis for bringing this to the collective consciousness and once again backing the fringe dwelling geniuses out there.

Go get your ears around it!