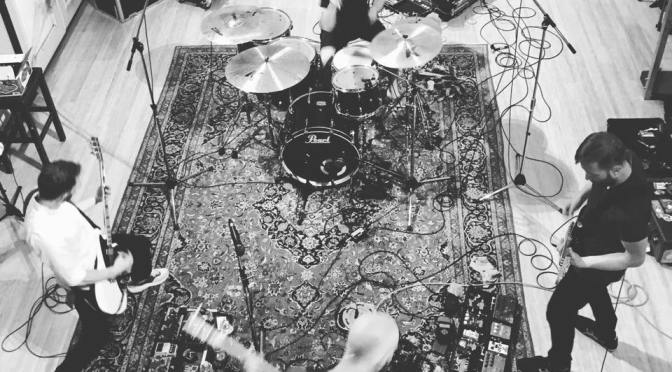 The bass guitar is noticeably more pronounced and cuts through with a snarl and attack that was sorely missing from ‘Love of Cartography’. For my ears this was the first thing to stand out amongst the multitude of layers that would ultimately reveal themselves.

The drums are better too, a more present and clear snare breaks through and the cymbals are brighter and fuller than before. The kick drum still sits under a slightly muffled low-mid range but can be excused at high volumes.

Therein lays the next point; whilst it sounds good however you come by it ‘Made of Breath Only’ sounds incredible up loud. DO NOT..i repeat..DO NOT settle for a low bitrate stream or crappy rip of this album. Get it for real, turn it up loud and close your eyes. Prepare for a ride.

As far as songs go this thing is a monster. Without words to adequately describe the music’s movement, riffs and melodies, I am at a loss..but I will try.

The opening piece ‘Our Days Were Polar’ is an ambient slow start that leads directly into the stunning ‘Worlds Away’. The noticeable energy and driving force of the band in full rock mode is so satisfying that I could not help wonder if they’ll keep it up for the remainder and thankfully they do. The one-two punch lasts for close to 10 minutes and serves as a wonderful reminder of what can be achieved by giving time and attention to detail. The songs weave and flow, rise and fall with masterful execution and it’s a joy to listen to. Maybe even more enjoyable is the tendency of the imagination to fill in the blanks where words might have been. Instrumental music by and large will inspire images and colors in the mind and ‘Made of Breath Only’ is full of mountains, storms, ocean blues and glacial whites and a million other indescribable ideas.

In comparison to the bands previous work there appears to be less blips, clicks and glitch sprinkles. Less overt synth and key board leads, less meandering and more powering forward. The rhythmic patterns and jarring guitar work that pushes and pulls sounds from left to right via harsh and urgent guitars is at its best here. The urgency and intensity is upped to a much higher state that it can become overwhelming. Consider the wave of emotions you might encounter if you were to lose your footing whilst scaling a cliff face. A rush, a pause, a held breath. That’s where these songs can take you. The soft embrace of a pillow after a hard days work, that’s the relief and comfort of ambience and lulls can conjure. The connection to ‘feeling’ is palpable.

‘Tundra’ served as a re-introduction to the band after their break form relentless touring and announcement of the album. It’s looping, cyclic riff repeats and seems to get lost before syncing back up after 6 or 8 bars playing with time signatures. It’s already seen favorable airplay and exposure. A good start.

The standout bracket for me was the ‘Made of Breath Only’ and ‘Into the Arms of Ghosts’ sequence. The title track is another slow ambient mellow piece that lays the ground work for the monolithic post-rock onslaught to follow. The familiar sound of the reverb drenched guitars, the accompanying keys and layers of sounds dwell pensively around a chord progression and build to a halt. ‘Into the Arms of Ghosts’ is the crescendo that really kicks the listener in the teeth. Sawing and grinding guitars sound phatter and more abrasive here giving us a much more post-metal angle. The baritones are put to good use and the band sound heavier and more focused than before. The track is sure to become an essential part of any live performance..if not for the jarring and jagged riffs and odd timing but for the sheer joy of the band syncopating lines and soaring lead melodies.

‘Glacial’ is another piece which see’s Sleepmakeswaves flexing their post-metal muscle. The heaviness that comes with the guitars and crashing cymbals at a slower pace is made all the more devastating. It clocks in at just under 4 minutes but even these shorter tracks are just so more-ish I found myself needing to play it again before moving on to the next track.

It’s hard to describe and harder yet to write about. Simply put you need to hear this for yourself.

Similarities to Isis and Russian Circles earlier work come to mind. In Australia I can’t say any band has come close to this save for the group themselves. They are our most prominent post-rock exports and have been solely responsible for introducing a wider audience to the nuances of this relatively un-popular and niche genre of music. For the next chapter in the bands life I see no changes ahead as the barriers will continue to be toppled or leapt over with an arsenal of immersive and ambitious music which appeals to your love of rock (and guitars) but speaks to your heart without words.

‘Made of Breath Only’ is a pinnacle. A benchmark for others will measure against.