Building anything from the ground up takes time. It takes a special kind of effort and persistence to bring idea’s to life. Someone devoted to their craft will happily part with their money, spend hours researching and practicing the art to finally come to a place where what they have is truly something special. Meet Ben, he’s the captain and creator behind Codtone – custom guitar pedals. He’s one of those people.

Ok..the market for boutique, handmade effects is an interesting one. What got u started?

I definitely come at it from the position of a guitar player.

I’ve been a professional musician since I was 16 and grew up loving players like Jeff Beck, Hendrix, Stevie Ray Vaughan and in particular, Eddie Van Halen. They all have their own unique thing going on. The Ed thing, searching for “his” sound through DIY was a very influential concept for me and pretty much how things were done when I grew up. (Geelong in the 70’s & ’80s)

Pulling things apart and modifying them was pretty normal back then and I have always done most of my own guitar maintenance. At the time I never knew much about electronics however, just enough to change pickups or other simple repairs.

Fast forward to the late 90’s, I completed a Bachelor of Contemporary Music Degree. As seems mandatory for starving students these days I had hocked most of my pedals and, wanting new ones, discovered BYOC (Build Your Own Clone).

After successfully building a couple of their (excellent) kits I was totally hooked. I then proceeded to read up about and build every circuit I could. Progressing from kits and prefabricated circuit boards to vero board builds, home etched boards and point-to point-builds.  I still have crates of completed circuits I’ll probably never use sitting around my workshop. Essentially that was my apprenticeship.

There is a wealth of information out there on the interwebz and a really wonderful community of DIY pedal enthusiasts who share, help, discuss and encourage like minded builders. I’ve participated and learned a lot from these types of forums.

Initially I was just building things for myself and occasionally selling off a pedal to pay for more parts, locating and stockpiling (increasingly rare) parts is an important part of being able to build, but eventually it was suggested I complete the NEIS program, set up a website; www.codtone.com and, despite the huge number of people building “boutique” pedals these days, I have become quite busy!

Pedal mods are an interesting aspect to this whole industry. Can u tell us about some of the more common/regular mods you’ve done? Is it something u get a lot of requests to do?

Mostly I build custom pedals which will likely include extra options or changes from some classic circuit. Sadly, due to modern production methods and the prevalence of surface mounted components, many newer pedals just aren’t viable for repair, let alone mods, but I do do some.

Converting positive ground Fuzzes to standard negative ground is a common and sensible request. Adding clipping or voicing options to overdrives, clean blend controls to compressors or fuzzes- especially useful to bass players, swapping the odd power jacks to the modern standard 2.1mm style, true bypass conversions and there are a couple of cool mods for Line 6 Modelers that I will do.

The graphics and the look of your pedals is awesome! Who designs and decides what they look like?

Thanks! Sometimes the client will submit artwork or sometimes just a word, name or theme which I can run with. The rest of the time it’s just whatever I come up with. Over time I seem to have established a certain aesthetic that filters across no matter what. Sometimes they are a lot of fun, like  these “I’d like mammoth wearing a party hat” or “Darkside” themed pedals I’ve done recently. 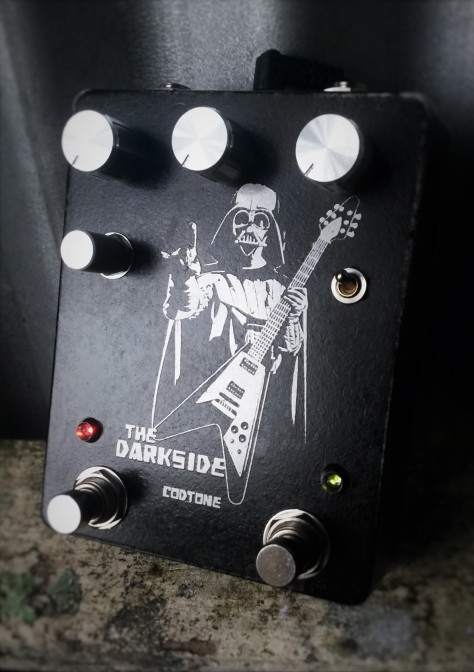 What training or qualifications do you have? How important were they to what you are doing with codtone?

My experience as a working musician and my Bachelor of Contemporary Music certainly are important in allowing me to relate to musicians. I use my experience to fine tune the voicing of my effects as well as construct devices that are practical to use.

I also did (most of) a Graphic Design Degree which taught me a lot about design, fonts and printmaking skills that I’ve applied to enclosure etching.
Any suggestions for people keen to try and learn a little bit?

Yes I owe everything I know about pedals to a free, open internet.

(*Protect that by opposing the TPP!)

There’s also a tremendous amount of mythology out there, usually created for the purposes of marketing.  I’ve spent a lot of time on forums, and I am even a moderator on a couple. These are tremendous resources but avoid speculative or fanboy forums! Instead arm yourself with factual information about pedal building. If you’re interested in building pedals, practice and develop good soldering skills, then start by building some kits.

Build, participate in, and do lots of reading at forums like BYOC, Madbean Pedals, and join Freestompboxes and DIYstompboxes these are all wonderful places.

If you are studying at the SCU (Lismore University) there is also an option to do a 10 week work placement here at codtone.
Who are some players/artists using codtone effects that people can check out?

I feel really fortunate and proud, that I’ve shipped codtone effects all over the world!

New York guitarist Wayne Krantz has a couple of codtones as does sonic terrorist Henry Kaiser. English guitarist Will Crewdson, is a Booty Thief  devotee. Will’s the guitarist with Adam Ant, Rachel Stamp, Scant Regard and has played many other gigs including Iggy Pop, Korn, No Doubt, The Tubes, and Cheap Trick.

Back here, there’s legendary Aussie guitarist Jim Kelly who uses a lot of codtone pedals both live and in the studio,  including the Booty Thief, a tap tempo Tremolo, a custom dual Marshal, Analogue Chorus, Ship of Fools Delay, Compressor and a Deluxe Codpiece.

I’ve had a long relationship building pedals for the great guitarist  Aaron West, he’s definitely someone to watch.

Sydney Session guitarist Franco Raggatt, Melbourne Blues/Soul guitarist Jake Cole of Cisco Caesar are two of my other favorite players though there are so many more.

What’s been your favourite build/job?

That’s a real Sophie’s Choice as there is a lot of time and (loving) labour that goes into any pedal, especially the etched ones I’m best known for.

To go with something less obvious, here’s a really early build, but to the best of my knowledge, I was the first person to put two circuits in a 1590A (mini) enclosure with this One Knob Fuzz/ Treble Booster combo so it’s a historic one! 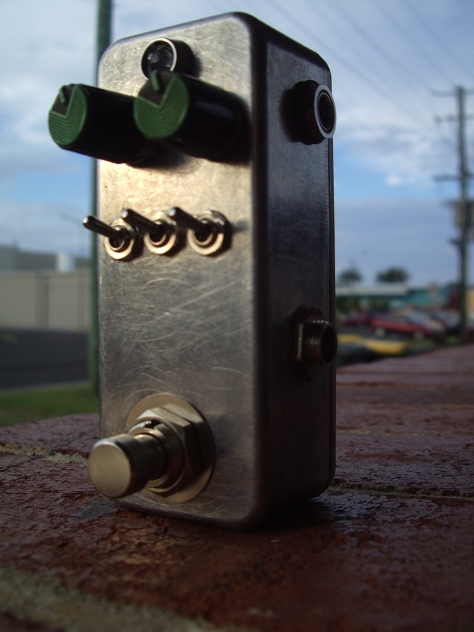 I am also particularly proud of this “Lullavibe.” The circuit is based on a Roger Mayer Voodoo Vibe, but with a few improvements. It won a “Pedal of the..” prize at the Madbean forum. As well as sounding great and being a particularly complex build, it features a huge and very detailed etch. With a magnifying glass you can actually see the reflection of the photographer in Neil Armstrong’s visor. 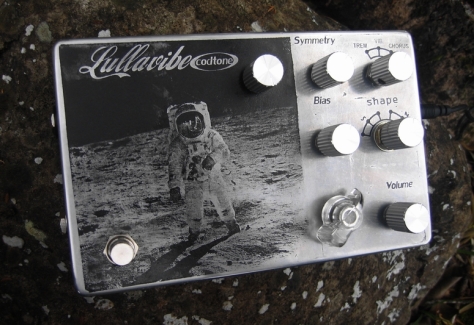 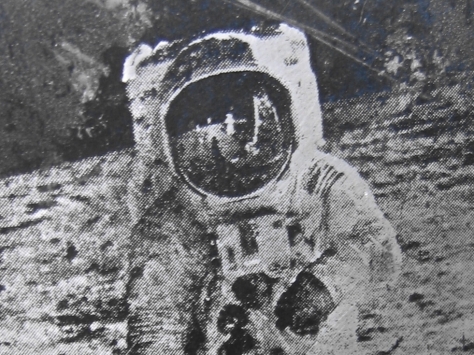 What’s been the hardest build/job?

It doesn’t happen often, but sometimes a build just seems haunted, it should be straight forward but then it turns out buggy. You have to walk away and come back to it with fresh eyes.

When there’s pressure to have it built for a deadline that can be stressful. Fortunately I find that musicians, on the whole, are great people, they’re flexible and happy to wait a little when the wait is worthwhile!

Go check out all the cool stuff on offer at www.codtone.com and see the range for yourself!!!