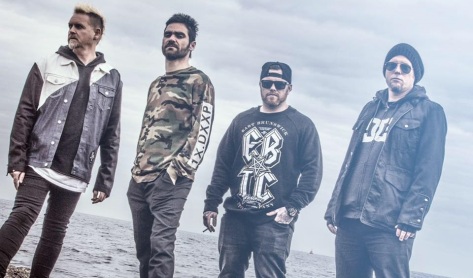 Some reformations are welcomed and others criticised. Which camp Superheist will ultimately fall into is yet to be determined. The strength of this new configuration under the old moniker may yield more than just a few flash-in-the-pan call backs to glory days though and perhaps there is hope for it. They teased via social media for some time that there was work being done on new material (read: DW Norton has been writing for 18 months) after a 13 year hiatus. ‘Ghosts Of The Social Dead’ is the title. Now they’ve broken their shroud of secrecy and let us all in on what this means. New band photo, new album, new song, new video..etc

Lets address the elephant in the room though.. or should I say the Ox?

I don’t get this guy, never have. Never will. Met him > yes. Had breakfast with him once. Played with him > yes, seen shows and shared the stage. He’s actually an incredible performer and front man. The ‘Heist’ have made a good move on that merit alone.

The band has a dedicated (and ageing) fan base, a good amount of nostalgia sits waiting to be capitalised on. Many of those fans will also know Mammal (Ox’s old and admittedly pretty cool band) so this seems a pairing match made in nu-metal heaven. It seems…..? The new track ‘Hands Up High’ is out now for you to judge for yourself.

So long as this guy sings in tune, pens some worthwhile lyrics and worries less about getting his bloody shirt off than he does nailing his performance..i’ll lay off him. If the band can conjure up something just a bit more complex and intricate than this first taste..then they’ll nail this. It’s almost there. Almost.

There’s a lot more to do than just bang out a few big opens, chugs and bends these days. What worked in the 00’s aint gonna mean diddly today.

Superheist now have to compete with Deez Nuts, DVSTR and even Dregg if they want to break any new market ground in the rap/heavy scene. Shit’s changed fella’s. I’m cheering for ya..but my hopes are not high if this first offering is you’re big swing.

And that is where I’ll leave things. Digging the memory lane trip but concerned for how anyone under 25 would give a flying nancy about this when Northlane, Polaris, Void Of Vision and so many others dominate.