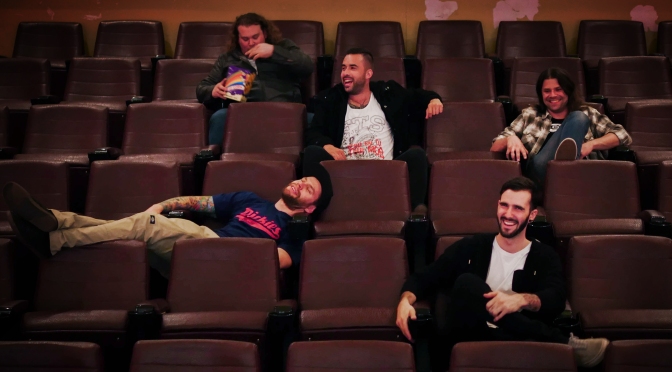 Adelaide based 5 piece JAPAM dropped 4 tracks and a bucket load of riffs on us with the ‘Hows My EP?’ EP. Yeh that’s never going to read right.

This was my first experience with their music and I have to say I’m impressed. They’ve managed to incorporate the low tuned heavy guitar sound associated with the kind of bands you’d find on UNFD.. but they defy the genre casting that would come with it by opting for a more rock/pop angle in the songwriting. It’s a curious blend that reminds me at times of Anberlin, but much heavier. Some of the more djenty-staccato moments have a slightly TesseracT feel to them and over all this has more class and maturity than a lot of others in the field tracing the same path. Except for the ep title.. that’s just going to grate me.

‘Seraph’ kicks things off with a bang, a bass line builds up, spoken word comes in over the top of muted guitars..the serrated riff loops over the pounding drums until it all launches full throttle. Its melodic and solid rock that has been well produced to give it a slick and tight sound.

Vocally it’s confident and Ryan has the pipes to pull this off without sounding whiney or nasal as many other front men performing this style of music tend to. The guy has a great range and uses it tastefully meaning even though he ‘can’ go real high..its more of a feature than a regular thing. It’s refreshing to hear some good quality hard music that doesn’t rely on gravelly screaming and hoarse shouting to get the emotion across. I’m all for that in most cases however here it wouldn’t sit right.

DK Facepunch is the current track doing the rounds and the supporting tour of the same name will see the band hitting up town centres playing their stuff. The standout element to this slab of rock is the straight forward chorus that lends itself really well to group vocals and head banging. It’s an anthem in the making.

Wolf Harass’ is my favourite track of the four. The crushing riff at the beginning sits so well and has a real punch. The song feature more of the layered vocals and harmonies that have served to make the melodies standout but it’s hard not to be distracted by the guitar work firing away in the background. Tasty.

It would be remiss of me to not mention the drumming is also fantastic. Not too flamboyant that it takes away from what is happening everywhere else, but if you listen you will hear some awesome fills and foot work to match.

There’s a video for this track and you can view it here:

It all drops May 13th (freaky Friday)

Follow the band at the links below, something tells me it will be worth it.