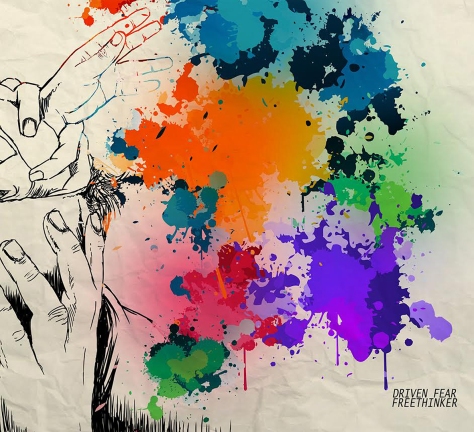 Driven Fear have been sitting on gold. If this doesn’t get you excited about Australian punk/hardcore…then maybe you don’t actually like punk/hardcore.

‘Freethinker’ is straight fire. From start to finish. This onslaught of riffs, high impact lyrics and energy is one of the best locally produced albums I have heard in ages.

The last time Queensland’s ‘Driven Fear’ dropped new music was back in 2011 with their album ‘Contender’. A lot’s happened since then. The scene fads and trends have come and gone, bands have blown up and fans have grown up.. etc and the time is right for a record like this to bring back some provocative and sincere music.

In taking their time to prepare this release (2 years of writing, recording and preparing) what the band has crafted is so solid from beginning to end that it begs the question: why don’t other bands take their time to make something special instead of putting out half baked EP’s and underwhelming albums? (end rant)

Driven Fear have been around a fair while, paid dues and probably learnt from others mistakes (or maybe their own?). If an album is worth doing, it’s worth doing right. They did this right.

If you like bands such as Defeater, Comeback Kid, Polar Bear Club or even some early Hot Water Music..then this is going to reach you. Vocals range from screamed, sung, hoarse and shouted. Backing vocals carry melodies under choruses and it all works very well to give something to sing/hum along to without using a dreadful auto-tuned ‘clean’ vocal.

Fast, abrasive and uncompromising in delivery ‘Freethinker’ is not trying to be cool. It’s not trying to be ahead of the pack or carve a new path. There’s breakneck double time and thrashy hardcore numbers, slower more tense and darker jams, a few more accessible tracks and it all feel fresh.

Freethinker, as an album definitely has a sense of urgency and relevance contained with the lyrics and over all delivery.

Track 3 ‘Crisis’ is one of those accessible songs on the album which benefits from a strong chorus/hook you can sing along with. It will get stuck in your head.

The first track lifted off the album in the lead up to it’s release was ‘In Care Of Pt2’ and it’s a great example of the dynamics and variety Driven Fear have incorporated into this genre of music. Stick around for the ending if this is the only song you check out!

Track 8 ‘The Red Hill’ is the one i didn’t see coming. A slower pace, more vocal and less guitar driven. It takes it’s time. A welcome break for the ears but is no less an intense song for it. The record finishes strong and hard with ‘Reach’ & brings the pace down for a more melodic and reflective end with ‘The Feedback Loop’ (longest song on the whole thing at 5:28 min).

I loved this album. I have not stopped jamming it since being given access to it.

Pee Records are dropping this on 26th Feb…. mark it in your calendar.