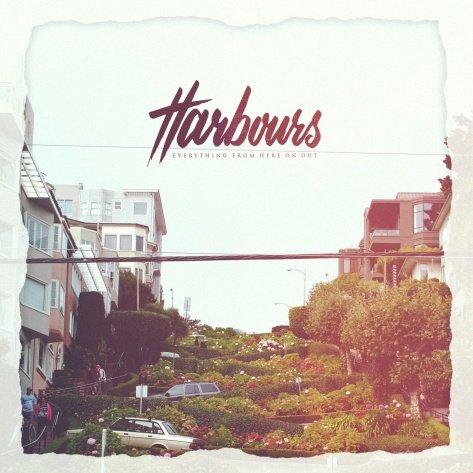 So one night I’m scrolling through fussbook as you do… and someone shares a link…”hey check this band out! *link” …I scroll past…but no more than a few minutes later I see someone else sharing the same link. Then another. Then another. By then I was curious enough to find out what was so good about it and so…I obeyed social protocol and I clicked the link. It went to a download page for a new act called ‘Harbours’. Who just dropped a 3 track demo/ep called ‘Everything From Here On Out’.

I hit play.. > #1 ‘Shelved’
They kick things off with a pop-punk guitar strumming intro and the band kicks in few bars later to a solid halftime/heavy groove. Then 8 bars in.. it breaks.. and *bam*..double time. The first thing I noticed is this sounds way too good for a demo. This sounds killer…better up loud too! I turn it up a little more. I’m sucked in. Sounding a lot like a StorySoFar/NewFoundGlory combo till the end of the song approaches and then its like an aussie Further Seems Forever tribute. I think I’m in love.

Track #2 ‘Golden’ gives us a great tom-filled drum intro before upping into more pop-punk double time fun, vocals kick right back in..with a very solid performance here too. You get some high notes, some shouts, even some low harmonies and at times a quieter delivery than normal. These are dynamics often missing from pop punk vocalists. Another thing I’m appreciating as I listen are the very subtle harmonies and vocal doubling. These elements are usually up more up front to either enhance the vocals ..like an effect…or worse .. to cover up the performance if it’s not strong enough. Not the case here. Everything that’s working is done with subtlety.
By the end here the vocals and the energy get pulled right back to a kind of mellow instrumental with clean guitars and roomy drums. It’s an awesome move and takes it’s time to settle down to an end.

#3 ‘Room Without A View’ has a mid paced sad-ballad ‘Citizen’ vibe about it…the chords carry a certain melancholy to them. It all comes across like it should.. that grungey/emo sound. The chorus is killer…total heart-string stuff…it’ll be something to watch for at shows, as people catch on the lighters will go up, people will sing along. Yup.. these guys are sick. No wonder every one was sharing this around. Typically the bass is buried in the mix, like..yeh he’s in there but he’s practically invisible.. so that’s always some thing that grinds my gears. Get inventive bass players ..move..do something more than follow the guitars!! But anyway..

This band is going to make a big impression if not for the quality of this material then definitely for the style and execution of something that’s been well and truly worn and done by many others. It’s not new, it’s not pushing the boundaries. ‘Harbours’ just seem to be playing all the good bits of their songs…all the time! I cant wait to hear more 🙂